By Scoffer - January 30, 2015
Rules packs for 40K tournaments in the UK have always been fun to read. For the last 6 months or so especially it almost seems like you need some sort of law degree or advanced maths diploma just to understand what you can and cannot take.

For the most part these are fairly simple and they will allow you 2 sources which all fine and good but an increasing amount of tournament organisers are starting to put limitations on what actually counts as a source and, to some extent, what a CAD even means. At the early stages of 7th edition this wasn't so bad as most official tournaments simply said bring a CAD and/or an allies detachment. All fine and good. 6 months on we now seem to be drilling down into what makes up a CAD with every new codex released through Games Workshop scatter shot approach to updates.

Let me elaborate. A Combined Arms Detachment (or CAD) is what everyone recognises as a force organisation chart. This was always 1-2 HQ, 2-6 Troops, 0-3 Heavy support etc etc. Lately Games Workshop have started to flex the boundaries of this mould and introduce codex specific CADs and formations which leads to all sorts of problems for the prospective tournament organiser. In a half hearted attempt to keep armies balanced these TO's have started limiting what CADs can and cannot be taken.

It wasn't long ago that most rules packs looked something similar to the following:


This obviously shifted at some point to include rule number 4: Maximum 2 sources. This was typically used to limit it so 1 CAD + 1 allied detachment was the norm. Why then has there suddenly been a further shift to further try and limit selections to keep things "fair and balanced"?


Case in point, recently I attended the biggest 40K event that was ever held within the UK the caledonian uprising and the event was highly regarded as a great success despite a couple of minor hicups. The rules pack however looked more like the following: 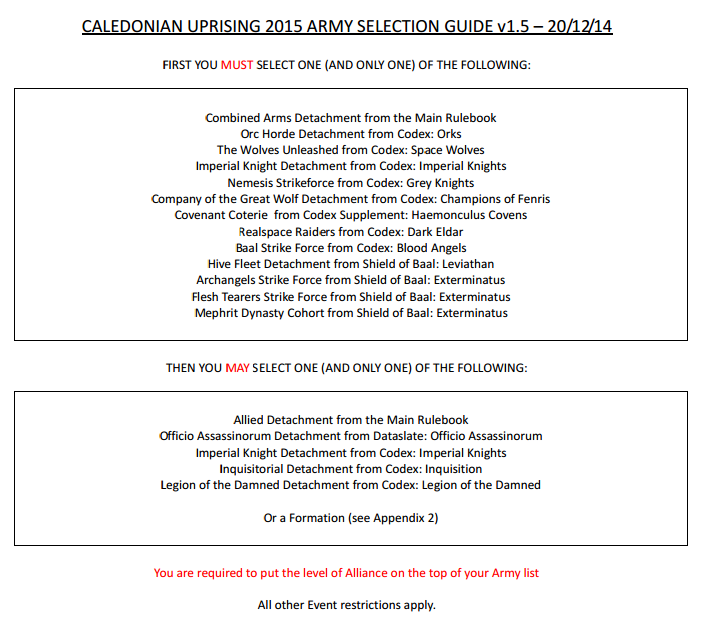 As you can imagine there was more than a few lists sent back for corrections where people had used a formation in the wrong slot, used a formation for a secondary which was actually part of a primary and so on ad nausea.


What does all of this mean for anyone wanting to attend a UK tournament following this release? Well, one of two (possibly 3) things will happen. Either tournament organisers will allow it and then have to listen to hundreds of people pissing and moaning about how broken it is or they will simply ban it and listen to a smaller number of people pissing and moaning about not being able use it. Its a no win situation which ever way you look at it. The possible third solution to this is for tournament organisers to put further limitations on the Decurion detachment and limit it in some way, maybe by point limit. Saying only 50% of your points can be spent on a Decurion detachment for example but that will also lead to having to put the same limitation on The Wolves Unleashed or the Baal Strike Force further complicating the whole mess meaning that only fully certified astrophysicists with a minimum of 5 years on the job training can understand.

Of course the usual argument against all of this will be that if you don't like the rules pack then don't attend the tournament. This of course would be a valid statement if tournament organisers in general didn't just copy and paste the rules pack from someone else. Heaven forbid they actually come up with their own thoughts on how a tournament should be organised.

What is the point of all this? Well actually its points. The game we all love has a point system for each model, upgrade and piece of war gear available in every codex. Why not simply let us use the points limit and allow us to come up with our own lists so we can play the way we want to play? How would that be any different to the 9 Forge World Hornet spam or 3 Wraith Knights allied with 2 Riptides which are allowed?

To put it simply, restrictions on top of the rule system don't make the game any more balanced. People will always find loop holes within any rule system to use the units they want to use. Lets remove the limits and allow everyone to use exactly what they want.

By Scoffer - June 25, 2020
With a new edition of 40k around the corner and with Games Workshop (GW) finally using external play testers for their systems I recently stumbled across an interesting discussion. Rather than me giving my thoughts on the matter, instead I'm just going to present the options and let you folks decide for yourselves. I think this will eventually end up in the bucket of other unresolved questions regardless of the amount of debate around it but thought it was unique situation either way. The Issue As previously mentioned GW have started using external play testers for the new system and this obviously includes the new edition of 40k. If you check out their community pages many of the faction focus articles are not written by GW staff. Instead, these are written by certain community members who were testing these rules and it gives their personal opinion on those factions. While we all sit and eagerly wait the new system to arrive a certain team for the WTC (World Te
Read more